“This photo from Griffin Johnson, encompasses the feeling of every first-year student when the pandemic robbed them of the start of their freshman year. Students were asked to move in only to be asked to move out two weeks later due to the uptick in cases on campus,” Aditya Penumarti, photo editor for Agromeck, said. 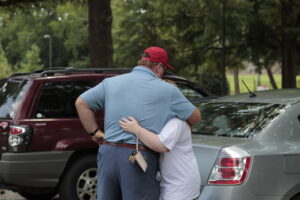 Emily McNeill, a freshman studying.  communications hugs her dad before they go back home Aug. 30. They received the news on Aug. 26 that NC State needed all students living in on campus housing to move out by Sep. 6. Even though Emily said that she expected that they would be kicked off campus, she was disapointed nonetheless.

Spread of the Deadline- Deadline 1