Posted November 12, 2020 by Neha Suresh under News, Spread of the Deadline

Deadline 2 for the Agromeck yearbook 2021 is complete! Our second  spread of the deadline emphasizes  this year’s new reality yet again, with game days resuming and students unable to support Wolfpack teams from the stands in person. The story covers how NC State University Athletics became creative to support teams, fans sent in pictures of themselves that were turned into cardboard cutouts and placed in the stands on game day cheering on Wolfpack teams. The photos on the spread covers the carboard cutouts of students as the dominant picture on the spread and the teams participating enthusiastically in a game. This spread  was written by Andrew Mayer and designed by Kierra Shook. 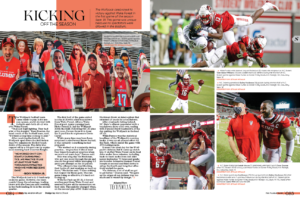 “I like how the pictures on the spread capture the energy and excitement that occurred during the game, while showcasing the reality of the event during this unknown time, “Don Bui, Design editor for Agromeck said.