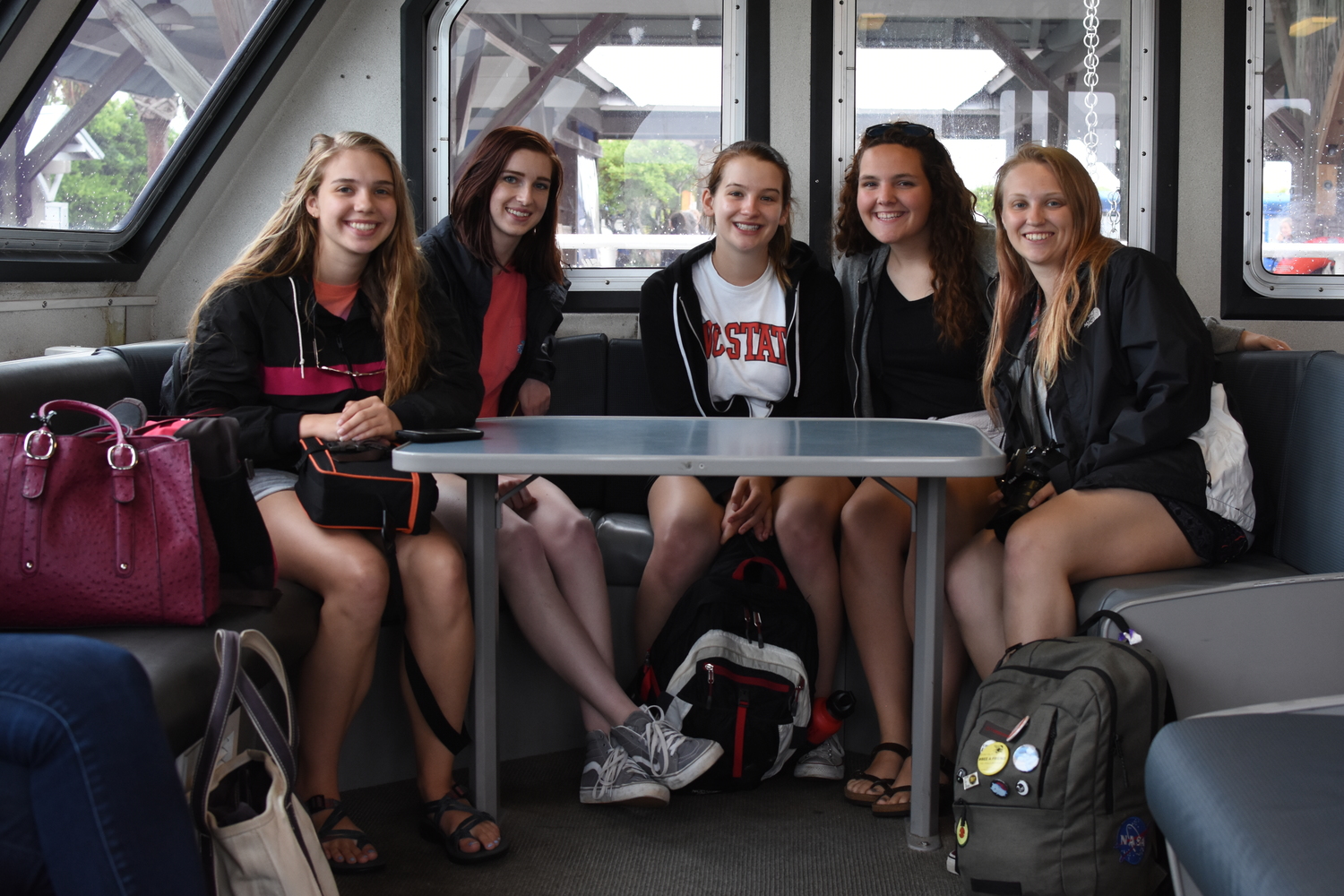 The 2018-2019 Agromeck Leadership staff poses for a group photo as they make their way out of Bald Head Island, North Carolina by ferry.

This past week the 2018-2019 Agromeck leadership staff took a trip to Bald Head Island, North Carolina to partake in our annual leadership retreat. The staff spent four days on the island, courtesy of our book publisher, Balfour, building team bonds, brainstorming ideas for the next book, and sharpening our skills in our weaker areas in order to return to Raleigh stronger than we left it.

Martha Collins, the Agromeck adviser, led the new leadership staff through a series of activities, including simple getting-to-know-you questions and a critique of the previous year’s book. She also facilitated a discussion about what makes a good leader and how we will lead the rest of staff in our new roles within Agromeck.

“A good leader is someone who knows their staff well in terms of personality and ability,” Katie Tart, the 2019 editor-in-chief, said. “Over the course of the past four days, I have gotten to know the rest of leadership staff in both ways in terms of their leadership styles and personal traits, and this will help us over the next year to produce the best book possible.”

To prepare for reporting on NC State’s campus, the staff does a practice reporting assignment on a particular aspect of Bald Head Island. We spend some time researching about the island, and collectively come up with an angle for a story. After we decide on an angle, we venture out to speak with local sources, find great photo opportunities, and collaborate with one another to create a finished product to kickstart inspiration for the design of the new book.

This year the staff chose to focus on the impacts of tourism on Bald Head Island in terms of conversation, specifically as it pertains to those who reside on the island year-round and those who work part- and full-time.

From a quick stop at a local tourist shop, we found a seasonal employee of 6 years who felt strongly about the effects of tourism on the island and on the community of Southport, and was able to direct us to professional sources in charge of the growth of the island.

As new information was gained by professional sources, the writers had to shift their idea of conservation of resources to the impact of tourism as it affects trash, construction and urbanization on the island. This shift led to a more interesting story, but created a challenge for the visual theme of the spread.

“When you create the lede or the story concept, the writer will already have one idea for visuals in mind, but there’s no guarantee that it’s gonna be the same idea that the photographers come up with,” Kaydee Gawlik, the 2019 photo editor, said.  “As we started talking to some of the people, it became clear that some of those images wouldn’t be viable. So then we kind of shifted over to tourism and how the effects of that aren’t always from intention, which became harder capture.”

This small instance on retreat foreshadows what could happen between staff members in the upcoming year, and Gawlik hopes to utilize her leadership role to improve the communication and overall functionality of the organization.

“This year, and in years to come, we want to make sure that photographers get in contact with the writer to make sure that if there is a specific slant then we’ve got photos that go hand-in-hand with the text, and if it starts with one slant and that changes from someone that you are talking to, then just text them to give them an update,” Gawlik said.

Other activities included a True Colors Assessment by Ellen Meder, the adviser of the Technician Newspaper, where the staff learned more about each other’s personality types and a “Ask Me Anything” with 2015 Agromeck Editor Liz Moomey where she gave advice to the new staff based on her past experiences. Our Balfour representative, Kent Sutton, was also in attendance to collaborate with the staff on new ways to promote the book to reach more students.

After several days of hard work, the staff is ready to take on their leadership roles and bring their new ideas back to Raleigh to implement it in the production of the next year’s book.