Posted November 9, 2016 by Meredith Wynn under Photo of the Week 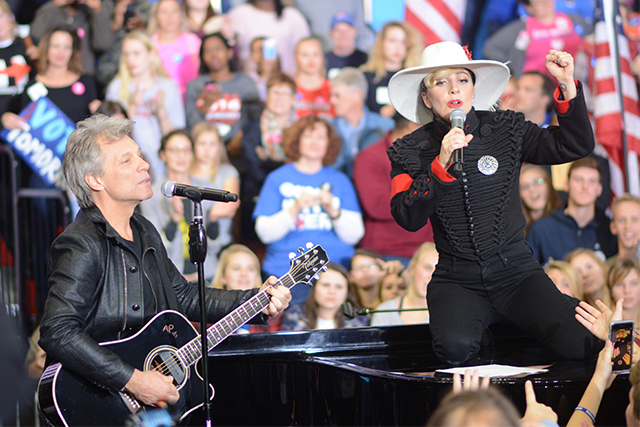 Jon Bon Jovi and Lady Gaga perform at Hillary Clinton’s midnight rally in Reynolds Coliseum the night before Tuesday, Nov. 8. Both artists performed, and spoke about why they supported Clinton’s campaign. They emphasized the importance of the 2016 election and getting out the vote.

This week is a very special Election Day edition of Photo of the Week! Democratic presidential candidate and former Secretary of State Hillary Clinton held a rally Monday night in Reynolds Coliseum, while Republican candidate and real estate developer Donald Trump held a rally in Dorton Arena. Staff photographer Adam Schmidt captured this great shot of musicians Jon Bon Jovi and Lady Gaga during their performance at Sec. Clinton’s rally. While Sec. Clinton was projected to win the election by most polls, victories in Florida, Pennsylvania, Michigan, and North Carolina gave Mr. Trump the 270 votes needed for a victory.

To stay up to date on all Agromeck’s national news coverage, follow us on social media!

Spread of the Deadline | Wolfpack Olympians