Posted December 10, 2015 by Meredith Wynn under On Assignment 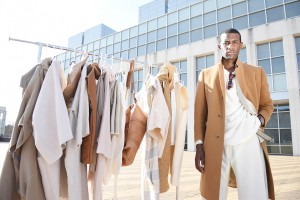 Joseph McRae, a senior in applied math and electrical engineering, poses with the second collection from his androgynous fashion line outside of Monteith Engineering Research Facility. McRae’s second collection made its premier in the 2015 Sparkcon fashion show.

“I’m not in stores yet, but after this maybe I will be!”

Today, on a sunny courtyard on Centennial Campus, Photo Editor Kai McNeil took Joseph McRae’s portrait for Agromeck’s upcoming issue, where he will be featured as our September Profile. McRae, a senior in electrical engineering, showed his latest androgynous apparel line at this year’s SparkCon.
Editor in Chief Molly Donovan also tagged along for moral and technical support. Of the shoot, Molly said that Joseph was enthusiastic and easy to work with. “The hardest part for me was holding up the reflector!” she said.
Kai chose to shoot Joseph, who is a senior in electrical engineering, at the Monteith Engineering Research Facility. “We’re profiling him because of his second fashion line, which was shown at SparkCon,” Kai said. “I wanted to show the contrast between his major, engineering, and his side project, which is fashion design.”
The spread on Joseph McRae will be in this year’s Agromeck. Don’t forget to order your copy!